Home › Career, Education, Personal Finance › Are You Trying too Hard to Follow the “Right” Financial Script for Your Life?

We often get caught up in scripts about our lives. We have a list of things we’re “supposed” to do at various stages in our development — including financial milestones.

But does that really make sense for you? Should you make the effort to stick to the “right” financial script for your life? 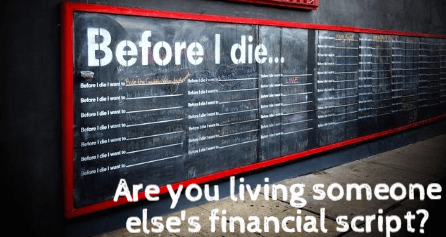 Do You Know What You Really Want from Life?

The first step is to figure out what you really want from life. You need to get down to the “why” of your life, and how money can help you achieve your goals.

It’s tempting to follow the path marked out for you by your family, friends and society. We tend to have a life and financial script given us. Often, the script is as follows:

There’s nothing particularly wrong with this life and financial script. However, some of us don’t feel that this applies to us, or that everything needs to be done in the same order. The problem with blindly following the script is that you don’t always take the time to review your personal priorities. You can go years trying to keep up with the Joneses and desperately trying to make your life fit everyone else’s expectations before it all falls apart.

I know that my recent new start in life came, in large part, because I was following a life and financial script that I didn’t spend too much time evaluating. I did what I was “supposed” to do, and I didn’t want to let others down, so I ended up marrying young and mostly following the script (or at least trying to follow the script) until my husband, who was also following a script he became disillusioned with, asked for a divorce. 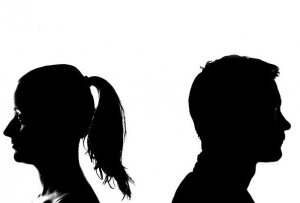 While we had talked about money before marriage, we hadn’t really managed to agree on long-term goals or even on what we most wanted out of a current lifestyle. We ended up becoming completely different people. Once we realized who we were as people, it didn’t seem we were compatible — financially and otherwise. I would have probably stayed with my ex, working to make it work, but he asked for a divorce, and now I’m trying to figure out what to do next. This time, though, I have a better idea of who I am and what I want to accomplish in life. I’m not following someone else’s script.

Figure Out Your Own Financial Script

You can go by your own financial script, based on your personal lifestyle goals. You’ll need to work on good financial habits that can help you reach your goals, but it doesn’t mean that you have to reach for the same things as everyone else.

One of the things I decided was that the financial script that says that buying a home should be a goal is not for me. I doubt I’ll buy another house again. I’m renting a house right now, and what I really prefer is apartment living. Hardly keeping with the script we’re given when younger.

You also might not need to go to college like many of us are told to do. Instead, it might make more sense to go to a trade school or gain some other marketable skill. Getting a degree just because someone tells you that you should isn’t always the best option for you.

There are a number of ways that you can make your own path, whether it’s waiting a little longer to get married and have kids, deciding that a “traditional” retirement isn’t for you, or any number of other ways you can move forward. I won’t buy a big TV and I prefer to spend money on travel instead of filling my house with things. Someone else might have other priorities.

One of the most likely ways to ruin your finances is to make the mistake of thinking that you have to follow a specific financial script for your life. Don’t let someone else tell you to do something. Take the time to figure out what matters to you, and arrange your priorities around that. If I’d taken the time to create my own script during my 20s, I wouldn’t be in my 30s trying to figure it all out from square one. I don’t exactly regret my choices (I don’t regret having my son), but I can see how things might have been different.

Shares
← MMS054: How to Avoid Financial Scams
MMS055: How to Save Money on Your Wedding →