Home › Education, Personal Finance › Is Your College Degree Worth the Debt You’re Racking Up?

According to information reported in the Chronicle of Higher Education, about 60 percent of the 20 million Americans attending college have to borrow to help cover the costs of their college education. By now, it’s a well known fact that outstanding student loan debt in the United States tops $1 trillion.

However, it’s almost necessary for students to borrow to pay for college because the cost of university per student has risen by almost five times the rate of inflation since 1983. With the cost of education rising, few people can afford to pay for it outright. And the other side to this coin is the fact that stagnating wages and a tough job market make it difficult to justify that expense. You have to borrow to attend university, but will you be able to get a job that allows you to repay those student loans? 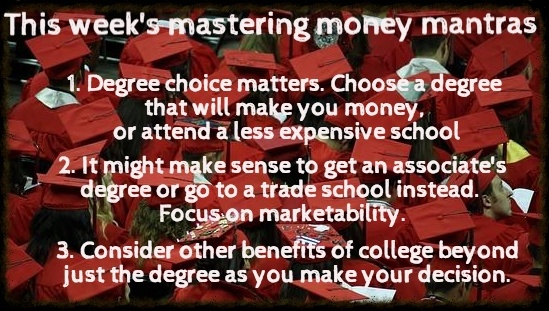 Right now, there is an uproar about the “uselessness” of a college degree. Some experts say it’s not worth it, while others say that there is still value in an education. Mark Kantrowitz, an expert on paying for college and the publisher of Edvisors, recently told me, for a story I was working on for another outlet, that it’s worth it if you can graduate with debt that is less than your starting annual salary. While the situation is getting dire, Kantrowitz says that the class of 2014, with its average debt of $33,000 per person at the end of a four-year degree, is still within that threshold, since the average starting salary is $45,000 per year.

Of course, individuals aren’t averages, and we’ve all heard horror stories from those who have graduated with tens of thousands of dollars in student debt and been unable to get a job that pays the bills. So, is college really worth it?

As with all personal finance questions, the answer is: It depends.

Take a Look at Your Degree Choice

Going to college in and of itself isn’t a bad thing. After all, with the right education, you can do well for yourself in the money department. However, your college degree worth is based on what’s in demand. As Larry Ludwig pointed out on a social media post in response to our topic, it’s mostly about STEM fields. If you want your college degree to be worth the debt you need to attend school, look at a degree in a field related to science, technology, engineering, and math.

This graph, as seen on NPR, is rather telling. It offers a look at the majors that are likely to repay you — and those that are the least cost-efficient: 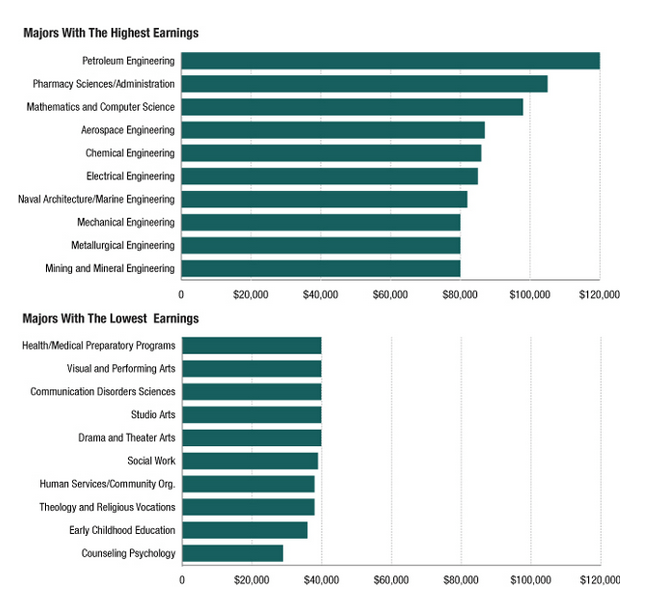 While this doesn’t mean that you should eschew childhood education or a religious vocation,  it does mean that you need to be careful about how much you spend to get your degree. Going to a big-name school (with a big price tag) doesn’t make sense if your earning power isn’t going to allow you to repay the loan.

I earned my four-year degree in communications at a small state school. And, while my M.A. in journalism cost as more than my entire four years for my undergrad, I still came out of it just fine. My annual earnings exceed my debt, and attending Syracuse for my journalism degree provided me with connections that allowed me get me freelance career off the ground.

My experience brings up another part of the equation: What else are you getting out of your time at university? I connected with people who could help my career. Experiences like internships can be useful, and there are schools with strong alumni networks that can provide you with mentors and job opportunities later. But, even so, you have to consider whether or not the cost really is worth it. But it’s something to consider. With the right connections, your college degree could become more cost efficient.

Instead of assuming you have to pay a lot of money to get your degree, it makes more sense to carefully consider your options, and choose a college degree worth the investment, or rethink where you will attend school.

Do You Need a Four-Year Degree to Succeed?

Another consideration is whether or not you even need a college degree to succeed. Our society places such a strong emphasis on the four-year degree that we think that it’s “required.” The reality, though, is that there are plenty of other ways to make good money.

Many in our economy are looking for those with specific skills. The associate’s degree is fast becoming a popular alternative to four-year degrees, since these types of degrees often focus on practical skills. And you might not even need an associate’s degree. There are even jobs with good pay that don’t require any degree at all. A nine-month certification may be all you need.

In some cases, it’s more about developing a marketable skill than it is about getting a degree. However, you still need some sort of a certification, whether it comes from an apprenticeship or a short-term program at a trade school or technology college. The reality is that you still need to “prove” that you are qualified.

But that proof doesn’t need to be a four-year university degree, and you might be better off financially looking at other options. Besides, there is increasing evidence that today’s university system isn’t truly preparing grads for the workforce. If that’s the case, you might be more marketable with some sort of professional or trade certification than a bachelor’s degree.

Rather than telling high school students that they need bachelors degrees, maybe it’s time to offer different options that might have better outcomes in the long run.

Check out our latest Money Mastermind Show episode on this topic:

What do you think? Is your college degree worth the debt? Do you wish you had done something different? Do we need a different focus in our country?

Don’t forget to watch live Wednesday nights at 10 p.m. Eastern. You can watch via our Google Plus page.

Shares
← MMS002: Is Getting A College Degree Worth It?
Money Mastermind After Hours: Today’s Colleges Don’t Prepare Grads for Workforce →

3 Responses to Is Your College Degree Worth the Debt You’re Racking Up?