In recent years, we’ve heard a lot about how important it is to be honest and upfront about your finances with a potential life partner. As we’ve become more open about talking about couple finances as a society, we hear more stories of how singles want a peek at a potential partner’s credit score and debt situation before getting too far into the relationship.

While it is important to have an idea of where a potential partner stands in terms of credit and debt before committing yourself (after all, you might need to come with a plan to help one or both of you get out of debt), a “money” talk that focuses on numbers isn’t enough. If you’re thinking of marriage, whether it’s your first marriage or a subsequent marriage, you need to talk about how you view money, and the things that you are willing to spend on. 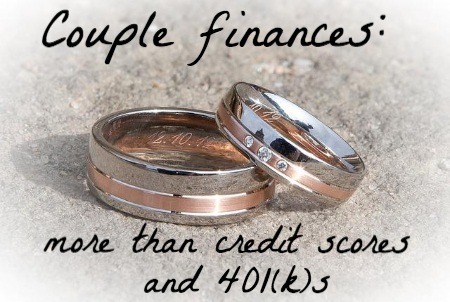 What Do You Value?

Financial compatibility isn’t just about figuring out how to make it work if one of you is a “spender” and one of you is a “saver.” It’s also about more than how comfortable you both are with debt, or how much you want to save for retirement. These are all money discussions that you should have if you want your couple finances to succeed. However, these are about the numbers and surface considerations. They don’t address the true, deep feelings that often come with money.

What you really need to talk about is how you want to spend the money that you have, and what matters to you in terms of what you want your money to accomplish.

After my husband and I married, we found ourselves surprised by our financial clashes. We knew how much debt the other person had. We knew that we both wanted to save for retirement. But we didn’t realize that we had basic differences in philosophy when making decisions about what was worth spending money on.

One of our earliest fights came when he wanted to spend $X on a stereo system. The stereo I’d had since high school and brought to the marriage seemed perfectly adequate to our needs. Sure, it was a little iffy, but it played music like we needed it to, and I saw no reason to spend so much on something we didn’t really need. My husband accused me of never wanting to spend money on anything. He got this idea because I was reluctant to buy things. I didn’t want to buy a new TV. I didn’t care to get a second (expensive) frying pan when the one we received for our wedding was sufficient. I finally gave in on the stereo — and was angry about it for weeks.

What my husband didn’t understand was that I have no problem spending money at all. I just don’t want to spend it on things. His reaction when I wanted to spend roughly the cost of that stereo on plane tickets for us go on a trip? About the same as my reaction to the stereo. We had another fight. This time I accused him of not wanting to spend money since he dug in at any whisper of spending on unnecessary travel. He doesn’t like travel — and it’s one of my very favorite things.

Over time, as our income grew and our financial situation stabilized, spending decisions became less fraught. We ended up with enough money for me to travel (alone and with our son) and enough for him to buy the things he wanted. If we had been forced to confront these issues for longer, our marriage probably would have ended years sooner due to the fighting about spending priorities.

Planning Together for Shared Financial Goals

Successful couple finances require that you plan together and share the same financial goals and expectations. It’s great that you both agree that you need to set aside $X each month for retirement. But do you agree on what that retirement will look like? When you are making plans for the future, do you have the same vision? Are you working toward the same financial goals? You might agree that it’s important to give 10% of your income to charity. But which charity? My husband became increasingly upset about my tithing as he became less religious. He agreed that giving to charity was important, but he didn’t want that money going toward the church. He preferred giving to other causes.

There are a lot of emotions tied up with couple finances, and a number of ways you can use your joint money. When you have different priorities, it makes it difficult to make spending decisions with your partner without arguing. If you aren’t united in what you want out of life, it doesn’t matter how much you talk about your credit score or 401(k) before tying the knot.

Shares
← MMS049: How To Prepare For Financial Milestones
MMS050: How to Manage Money When You’re in a Relationship →

3 Responses to Forget the “Credit and Debt” Talk: Shared Values are What REALLY Matter in Couple Finances